This guide is used not just to recreate real life tactics used by teams all over the world for PES 2015, this is useful for everyone who plays PES to understand how vital and important it is to set your team up correctly so you can play PES 2015 the way you need to with your teammates following your attacking and defensive ideology.

If you want to attack down the wing with speedy cross merchants, if you want to play beautiful free flowing passing football, if you want to counter attack effective or play route one, direct football it is vital your team is setup to play in the style you need.

This site features Hundreds of different real life strategies for Football clubs and nations around the world, it’s not just about creating real life strategies but these strategies can used as templates for you own offline, 1 v 1, 2 v 2 or online play, I hope this tutorial helps you make the most out of PES 2015. 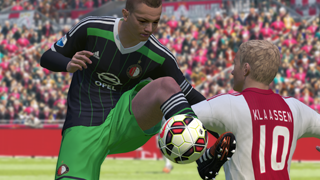 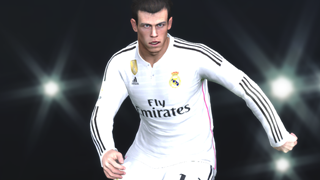 
POSSESSION GAME: Players will patiently look for teammates when attacking. Players off the ball will actively look for spaces to receive passes long or short in any direction.

COUNTER ATTACK:  Players will look to move the ball forward as direct as possible. Players off the ball will look to make forward runs into space behind the opponents backline. 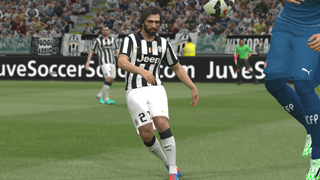 Build up is about setting up what types of passes will be used to create chances. This is important for setting up how your teammates move into space off the ball in relation to the ball carrier. This works in conjunction heavily with Attacking styles and also with support range.

When used with ‘POSSESSION GAME’ Your team will look to keep the ball and create chances through patient passing buildup and look to exploit openings when they present themselves.

When used with ‘COUNTER ATTACK’  Your team will look to create quick ‘one-twos’ & ‘give and go’ passes along with low crosses squared along the box when at the byline. You team looks to force openings through direct attacks. 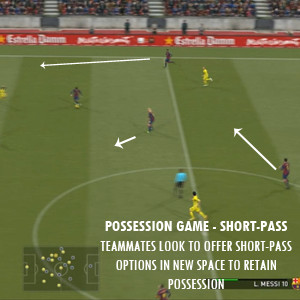 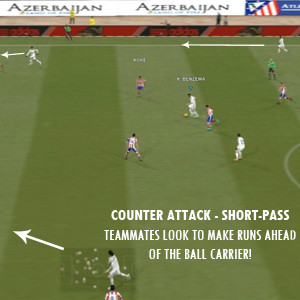 When used with ‘POSSESSION GAME’  Your team will look to keep the ball and patiently create chances from long balls and crosses in space from the back or from the flank.

When used with ‘COUNTER ATTACK’ Your team will look to play quickly and directly on the break. With long passes up the pitch or long passes out wide with the intention to bombard the opposition with crosses. 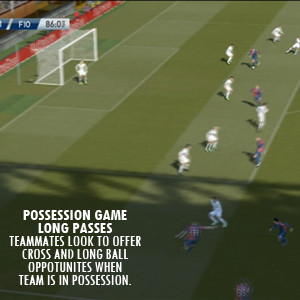 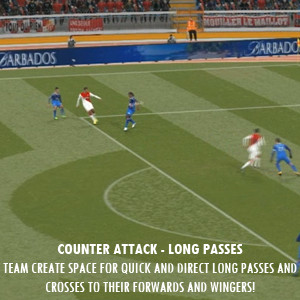 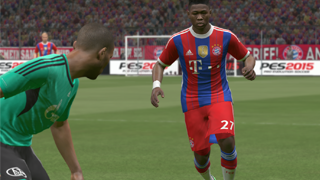 Attacking area is about setting up which area of the pitch your team will start and build attacks from.


CENTER: The team will look to begin their off the ball runs to form attack through the center of the pitch. The attack will be focused on central strikers and midfielders, this is suitable and effective for narrow formations and teams with strong central and attacking midfielders and technical strikers.

WIDE: The team spreads out wide and looks to begin attacks down the flanks. This is effective for teams which have attacking fullbacks to carry the ball forward and create an overload, effective for fast wingers and teams which rely heavily on crossing the ball to their attackers. 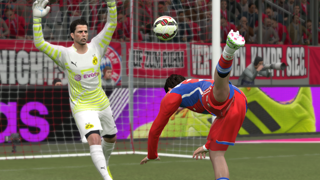 Positioning dictates how much freedom players have when positioning themselves to set up an attack and to temporarily play in different designated positions or switch places with players in similar positions.


MAINTAIN POSITION: This sets players to rarely if ever switch positions and stay tactically disciplined. Players move forward into positions designated by the given strategy. This is effective for defensive setup and for strict direct play.

FLEXABLE: Players can move out of positions to find space when the team is in attack. Also If a player finds himself out of position he will then take up the nearest position designated for a while, the drop back to his designated position. This is effective for creative teams where attacking midfielders or other players in free role ‘Second striker’ and other flexible positions can provide support outside of their obligation within the formation setup. 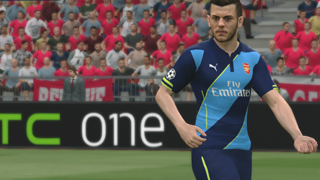 
1-3  These parameters will make players keep close together. This is useful for passing teams who like to dominate possession, ‘short passing game, tiki taka’. This is useful if you have a team full with short players since the team will have more options to pass to and very useful for possession teams to kill the momentum of their opponent by keeping the ball for a while.

4-7  Players keep a reasonable distance away from each over, this like with player support helps provide a nice balance for the team to play in a variety of ways.

8-10  Means players spread away from the ball carrier. This is useful for teams that play on the counter attack, so players will look to provide space up the pitch and provide with to play long balls and to help spread the play. This is also very useful for play route one attacking style. 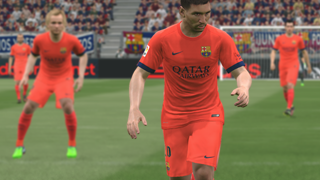 Numbers in attack dictates how aggressively teammates move around the ball carrier. This also dictates which players can join attacks depending on your formations positional setting


FEW: This instructs players to stay in their position and not move into space up the pitch to support the ball carrier. Only the forwards will move into attacking positions with the rest of the team keeping it's defensive shape. This is suitable for a defensive or long ball setup. This influences the ball carrier to make safe passes first rather than try risky passes.

MANY: This instructs players to aggressively move ahead into attacking positions to support the ball carrier! This also tends to speed up the attacking buildup and influences the ball carrier to make risky passes. Most players apart from the center backs will look to join the attack when possible. 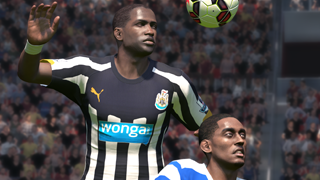 Defensive styles is your teams ideology when it comes to meeting the opposition team’s ball carrier. For you ‘the user’ this is important to set it up correctly, so you defend in the style which you have set you team. You can find yourself in trouble if you try to pressure aggressively and you team is setup with loose marking for example and vice versa.


ALL OUT DEFENCE: This sets your team to all fall back behind the ball and maintain it’s defensive shape. This is effective for preventing space in your own half for the opposition to freely attack your goal.

FRONTLINE PRESSURE: This sets your team to actively close down and to put pressure on the ball carrier, starting with your forwards, hence why it’s named ‘frontline pressure’. This is effective for winning the ball back quickly and winning the ball high up in the oppositions own half. 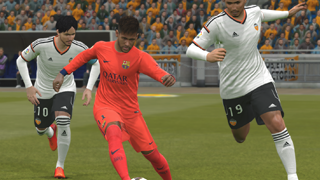 Containment area sets up which area of the pitch your team will focus heavily on marking the opposition teammates.


MIDDLE The team focuses off the ball on opposition attackers in the center of the pitch with wide players coming inside to help out the central midfielders and defenders. This is effective for stopping attacks down the center.

WIDE  The team focuses on opposition players in the wide areas, your team actively marks players out on the flanks with defensive players in the middle coming out to help out on either side. 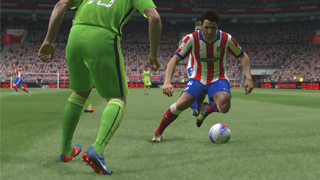 Pressuring sets the tackling and interception method used to win the ball from the opposition ball carrier. For you ‘the user’ this is important to set it up correctly, so you defend in the style which you have set you team. You can find yourself in trouble if you try to pressure aggressively and you team is setup with loose marking for example and vice versa. This works in conjunction heavily with Defensive styles and also with Containment area


CONSERVATIVE This sets up your team to actively look to close out nearby opposing teammates preventing the opposition from making long and short passes. This is effective for teams to keep their defensive structure and look to win the ball back by positioning and preventing space for the opposition to play into.

When used with ‘ALL OUT DEFENCE’ When falling behind the ball the team looks to keep it’s defensive shape, allows the opposition time to have the ball  and focuses on preventing  opposition from having space to play passes into your own half.

When used with ‘FRONTLINE PRESSURE’ The team looks to move up the pitch while keeping its defensive shape and prevent the opposition ball carrier form making forward passes, giving the obligation for strikers or players infront of the ball to make interceptions or force the opposition into errors or to try risky passes. 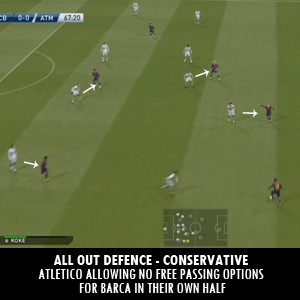 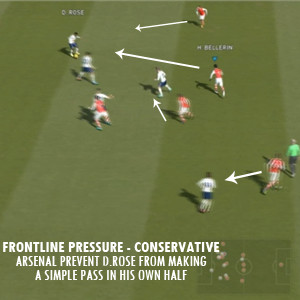 AGGRESSIVE This sets up your team to actively close down the opposition ball carrier directly. This favors teams who want to win the ball back making direct tackles.

When used with ‘ALL OUT DEFENCE’ The team falls back behind the ball then actively looks to disposes the opposition ball carrier quickly once they entering your own half.

When used with ‘FRONTLINE PRESSURE’ The team actively moves up the pitch and starting with the forwards look to actively close down and disposes the opposition ball carrier immediately. 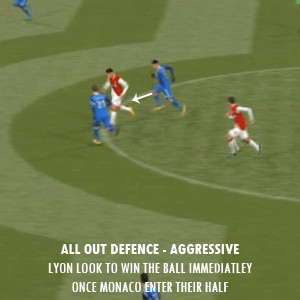 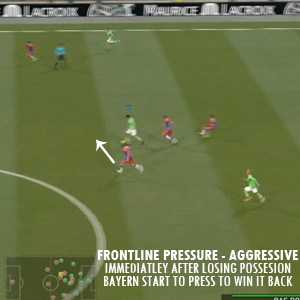 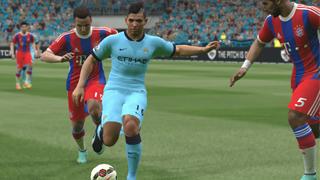 Self explanatory really. This setting dictates how High up your defensive line will hold.


1-3 Deep, good for getting players behind the ball and compressing space in the box, however this could invite too much pressure from the opposing team.

8-10 High, Players look to push up the pitch and keep a high line. This is good to help teams push forward in attack but can leave your team very open to counter attacks. 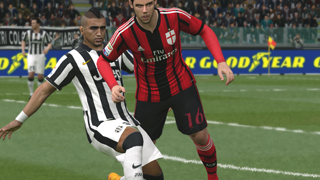 This dictates how closely compacted your team is when closing in around the ball carrier. This is also important for when your team wins the ball back from the opposition.


1-3 The team spreads out wide. This is effective for preventing attacks from the wings.

4-7 The teams forms up defensively in a balanced manner against the opposition.

8-10 The team forms up as a unit very tightly in the center of the pitch. This is effective for stopping attacks down the center. 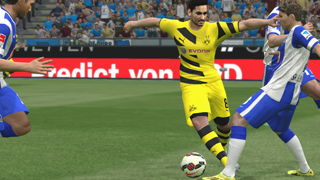 Numbers in defence dictates how aggressively teammates move around the ball carrier.


FEW: This instructs the attackers and non defensive midfielders to stay up the pitch and not help the defence out when the opposition has the ball. This is risky but effective for keeping attackers focused on just attacking and not getting stuck down the wrong end of the pitch.

MEDIUM: This instructs teammates provide balanced support defensively, unless the player is set as a striker or winger, the midfield is obligated to help out with defensive duties.

MANY: This instructs all players to participate with the teams defensive duties regardless of their attacking position. 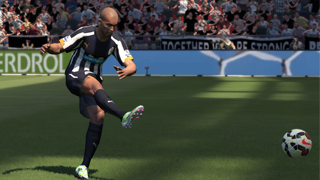 Finally you should now that: 1-3 and 8-10 dictate how extreme you want your team style to be for each parameter. It is also vital to balance out your values to work in conjunction with each over, try not to set contradicting values such as CONTAINMENT AREA to ‘MIDDLE’ yet your COMPACTIVENESS is values 1-3 so you team defensively is spaced out to far from each over. Lastly for set pieces It is advisable to set your Center backs to 'Join the attack'' Will help a lot with corners.


Thank you for reading the guide! 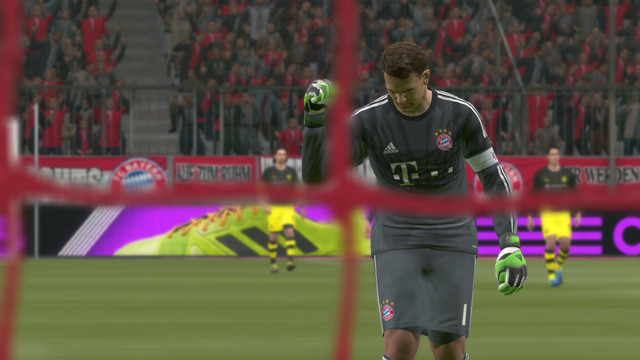